It’s been fun to step across my “enjoyment” of the Standard American Diet (SAD) and share my glucose meal profiles and overnight glucose data for the second half of my continuous glucose monitor (CGM) study. If you would like to catch up, I started by discussing the first half in CGM Study Results – Low-Carb Eating and CGM Study Results – Controlled Carb Eating.  That data was pretty predictable and made sense.  In fact, I made a graph that shows my a plot of my glucose response relative to the number of net carbohydrates for those ten days.  It’s not perfectly linear, but there is a definite upward trend.

On Day 15, my fasting glucose was 87mg/dL according to my glucose meter, and my glucose had been relatively stable overnight.  I had breakfast early in the morning: a Chick-Fil-A Spicy Chicken Biscuit and hash browns.  My glucose went from 104mg/dL to 147mg/dL, increasing 33mg/dL (Figure 1).  Since Chick-Fil-A provides nutritional information, I was able to look up that this meal contains 69g of net carbs.  For comparison, on Day 4, when I had a spicy chicken breakfast filet (no biscuit or hash browns, 8g of net carbs), my blood glucose spiked 17mg/dL.

I continued the fast food experience for lunch and had a Wendy’s “Son of Baconater” with no mayo or cheese, a small fries, and a double chocolate chip cookie.  This meal contained 107g of net carbs!  My blood sugar went from 111mg/dL-166mg/dL, a spike of 55mg/dL (Figure 2).  What is interesting is my glucose remained high, rather than come back down!

Overnight, despite all of those carbohydrates, my blood glucose was relatively stable and stayed in the range of 109-128mg/dL (Figures 5 and 6).  I feel like my body is beginning to learn what to do with all of these carbohydrates! 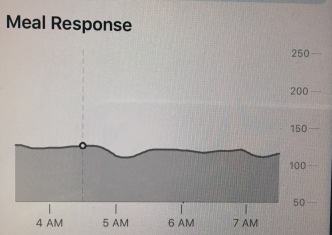 My glucose monitor gave an impressive reading of 80mg/dL to start Day 16.  That was my second lowest fasting glucose of the entire 20-day study!

I started the day with Chick-Fil-A again, but this time, I skipped the hash browns because I didn’t enjoy them on the previous day.  The chicken biscuit took me from 106mg/dL-138mg/dL on the CGM, an increase of 32mg/dL (Figure 7), which was pretty consistent with Day 15’s breakfast.

I had Chinese food for lunch: fried wonton with chili oil, triple delight, fried rice, egg roll, fortune cookie.  My glucose only increased 32mg/dL (from 114mg/dL to 146mg/dL), despite all of those carbohydrates (Figure 8)!  For comparison, the Chinese “Diet Dish” I had on Day 10; which could have only had carbohydrates in the sauce, increased my glucose 41mg/dL!!  There was clearly a larger effect, as you’ll see in the next figure, but it wasn’t a traditional spike.

I was incredibly stuffed, but I ate all of my Chinese!  As a result, there was a lot of time between my lunch and my next food opportunity.  I saved the data because it showed that blood glucose spiked several hours after expected, as I digested my Chinese food (Figure 9).

That evening, I had a snack of Flipz chocolate covered pretzels… Funny story, my husband had a snack on his study where he ate 5 of these pretzels.  It had zero effect on his blood glucose.  I, however, ate the entire bag, which corresponds to 5 servings (95g of net carbs)! My blood glucose went from 123mg/dL to 143mg/dL, only increasing by 20mg/dL (Figure 10)!  It’s incredible to me that eating an entire package of chocolate covered pretzels had a such a minimal effect, but it’s probably due to the Chinese food and the insulin it took to finally bring my glucose back down!

Dinner was potluck, so I had a large variety: Adjective Animal beer (12oz, drank maybe 8oz), Kettle Chips, tortilla chips, HEB guacamole, hamburger on bun with mustard, ketchup, tomatoes, pickles, mac and cheese, peanut butter porter with peanut butter ice cream.  It wasn’t a ton of each, but those carbs definitely add up, especially with the ice cream.  My blood glucose decreased from 131mg/dL to 118mg/dL (Figure 11)!

Takeaway #15: While following the SAD, the more carbohydrates I ate early in the day, it appeared to blunt my glucose response in the evening.

I went to bed not terribly long after dessert, as I was feeling pretty terrible again.  During my sleep, there were a couple of high glucose swings, likely due to the ice cream.  Everything was able to stabilize, however during the night (Figures 12 and 13).

Figure 13
By the next morning, I was back in pretty good shape, with a glucose monitor reading of 95mg/dL.  That’s not fantastic, especially for me, but it’s still considered “normal”!

Takeaway #16:  While following the SAD, I was able to “sleep off” the majority of the blood glucose craziness that I caused from poor eating.

I find all of this so fascinating… More to come!

This site uses Akismet to reduce spam. Learn how your comment data is processed.

This is a text widget, which allows you to add text or HTML to your sidebar. You can use them to display text, links, images, HTML, or a combination of these. Edit them in the Widget section of the Customizer.