Here we go with 10 more… This time, I’m going to start with fruits for when you need some sweet and then a few snacks, bars, and a protein.  It’s going to get harder and harder to have themes as I do this.  But, in looking at fruits, I realize there are many varieties that I have never tried.  I’ll have to try some unique fruits at some point and see if I can add them!

I never knew what a date was (well, other than the kind that involve a guy) until I ate my first Larabar (see Go-To Foods, 1-10).  Larabars are simple products because they use dates as the sweetener.  Pitted dates (the efficient route, as pits seem problematic to me) can be used to make your own Larabar type snacks.  One caveat, we did this once and burnt up our blender.  So, go slow and use a blending device that can handle them!  They’re really thick. 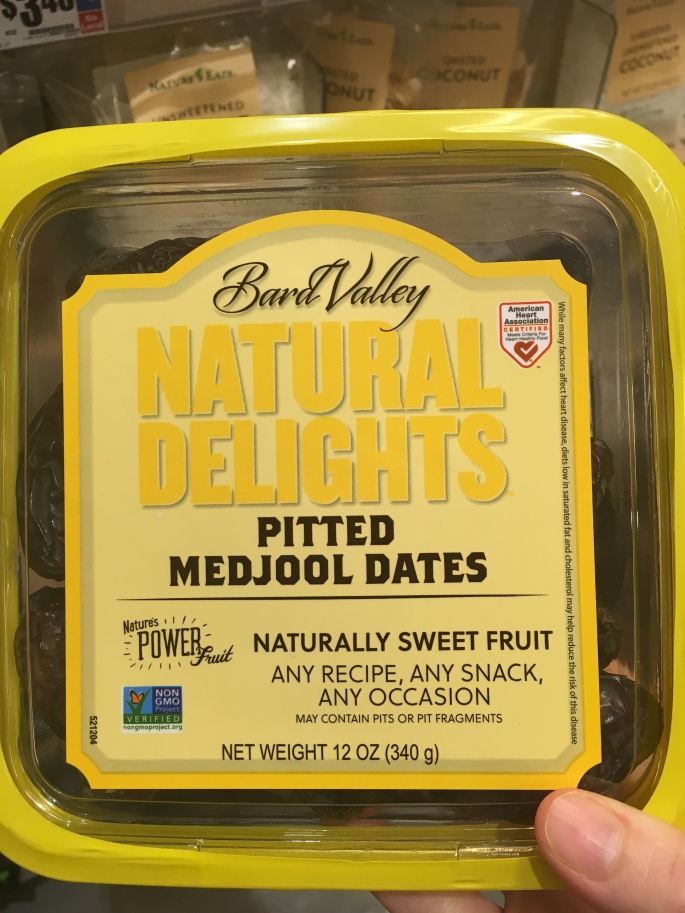 Blackberries are probably my favorite fruit.  When I was a kid, there was a wild blackberry that grew on a weed vine and they were good.  Regular blackberries are even better.  When they go on sale (because I don’t like the typical price tag), I stock up! 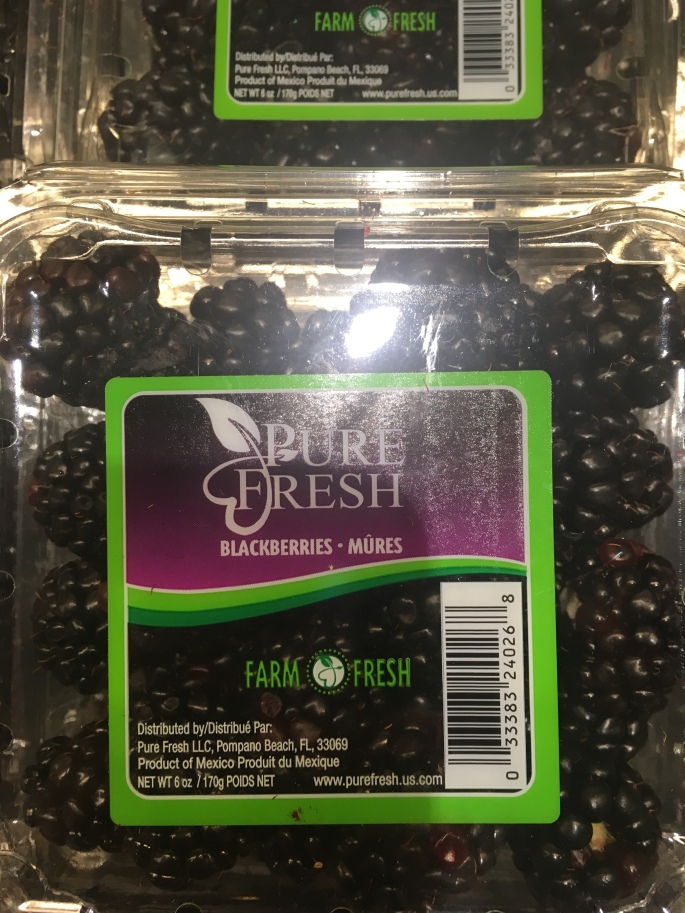 These are probably my go-to fruit because they seem to be on sale often and you can get a pound for a really good price.  You can blend them into a smoothie with some spinach or just eat them as a snack.  In my experience, they start going bad pretty quickly and soggy strawberries are the worst, so don’t buy them too far in advance of eating them. 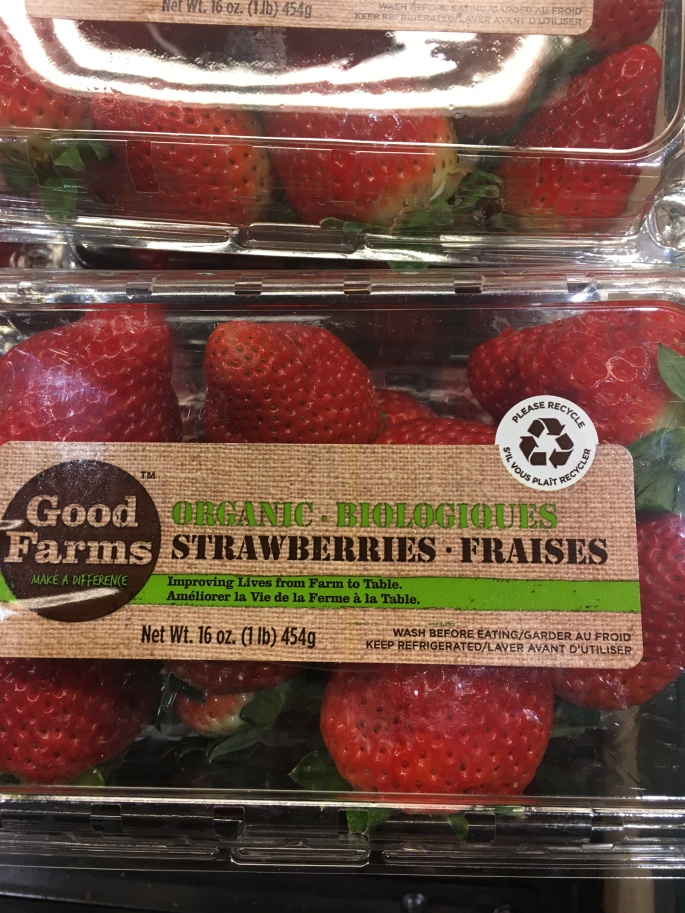 I didn’t like blueberries when I first started eating them.  But, they’ve grown on me over the years.  My parents grow blueberries, so I love when I get free ones, but I find a little goes a long way.  Blueberries work well as a snack, but also in steel cut oats or with granola.  I also recently had a blueberry beer that was actually good, but I digress…. 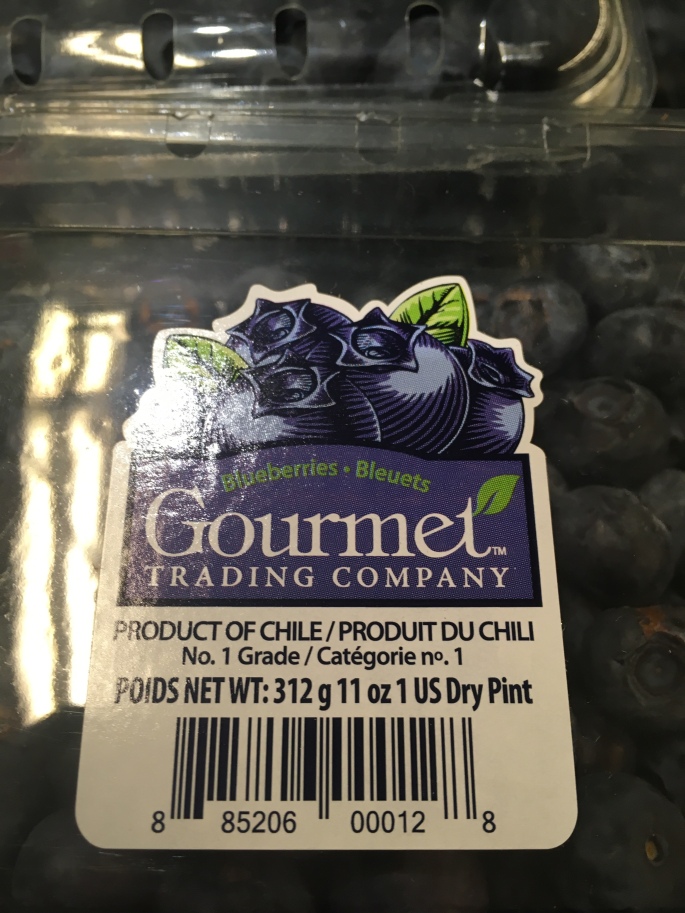 If I am going to eat an orange, these are the absolute best.  I used to buy navel oranges because I don’t like seeds, but they’re too big.  I would rather eat a small orange and mandarines or even tangelos, are good options.  It also helps that these are easy to peel because navels or other hard pealing varieties discourage me from wanting to eat them.  Definitely a fan!

My son recently told me that these were made by a rapper, but upon fact checking, it appears that they just ran an ad featuring Ice-T.  I have to admit that I am a little concerned that “Big Food” bought the company who makes these, but for now, they’re still legit.  Like before, I am choosing to avoid flavors with peanuts or other varieties I just don’t expect to like).  I’m branching out some to start including items that contain sugar, and while they wouldn’t be Whole30 approved, a little sugar is me-approved.  I just don’t see the point of not enjoying a little chocolate here and there!  These have a decent amount of protein for not having any weird ingredients!  I’m not really sure how I feel about “Natural Flavor,” but I guess it beats “Artificial Flavor”.  Personally, I would just rather know what it is.

Another tasty, yet without crazy ingredient, snack bar.  I love that they are so specific on their chocolate, apples, and blueberries!  Very limited ingredients, just like the Larabars and the no BS above.  They also use dates as a sweetener, but that’s fine by me! 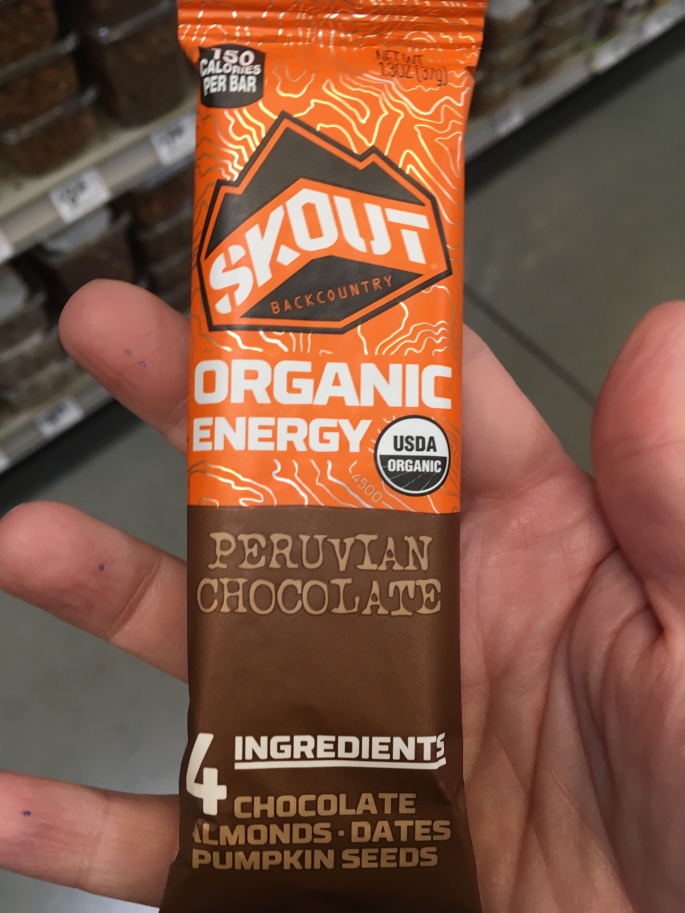 Usually gluten-free foods substitute gluten with other weird processed ingredients.  I expected corn-free tortilla chips to be the same way!  I will admit that I never heard of cassava flour before, but after looking it up, I’m not terribly concerned.  It’s from yucca root, and it’s still a starch, so you should eat it sparingly, but I at least feel like it’s natural.  It’s similar to wheat, but since it’s not wheat, it hasn’t been taken over and genetically modified (yet).  Corn is another substance that’s been genetically modified a ton, so it’s probably not the best for you.  This is a fair substitute for chips when it comes to eating salsa, pico, or guacamole.  But, remember, this is a snack food, not a main dish!! Oh, and their Nacho Cheese variety uses nutritional yeast rather than cheese product, so that’s a win for dairy free people, like me! 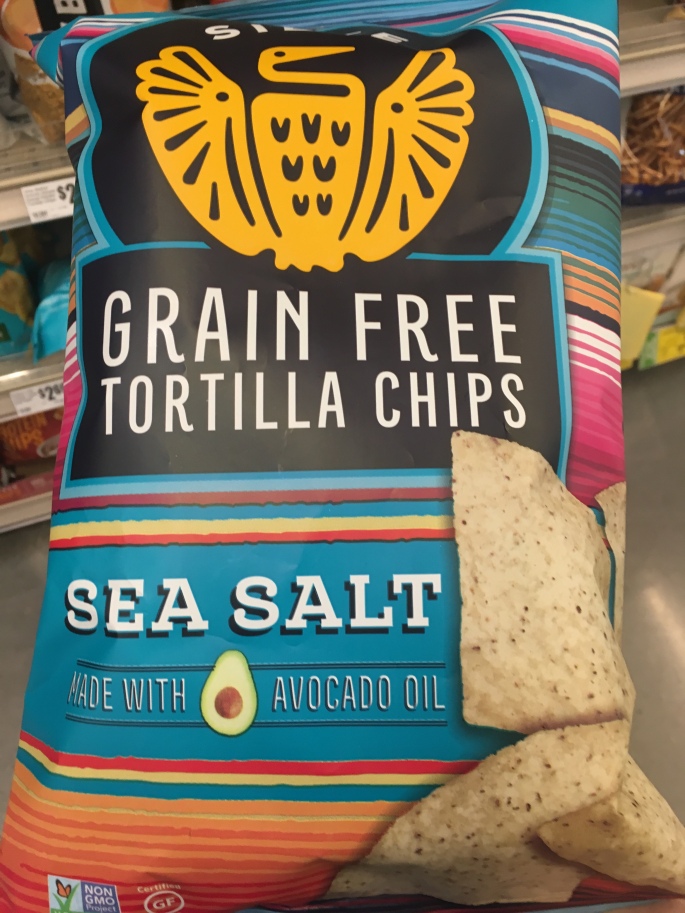 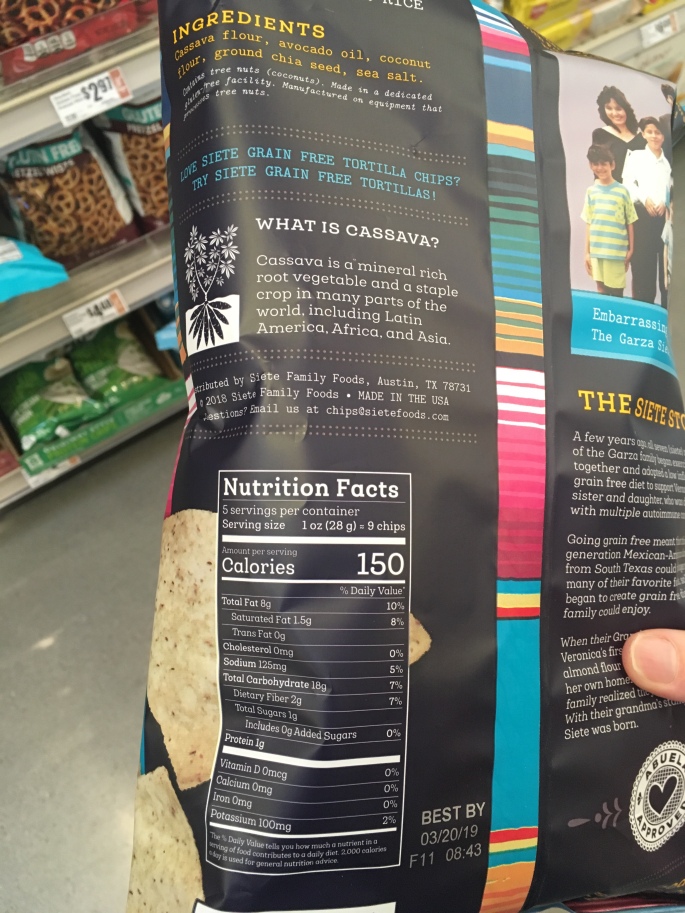 I got something similar, I think it was a flax seed chip, to this a while back at Trader Joes and again, while it’s not the same as processed chips, it’s a nice alternative for when you want something chip-like.  These chips are fried in sunflower oil, which isn’t my favorite (I would put olive and quality coconut oil above it), but it’s not as bad as soybean, canola, corn, or vegetable oil in my opinion.  Again, this is a snack, so eat it in moderation.  This does use corn, but since it’s non-GMO corn, I feel better about that. 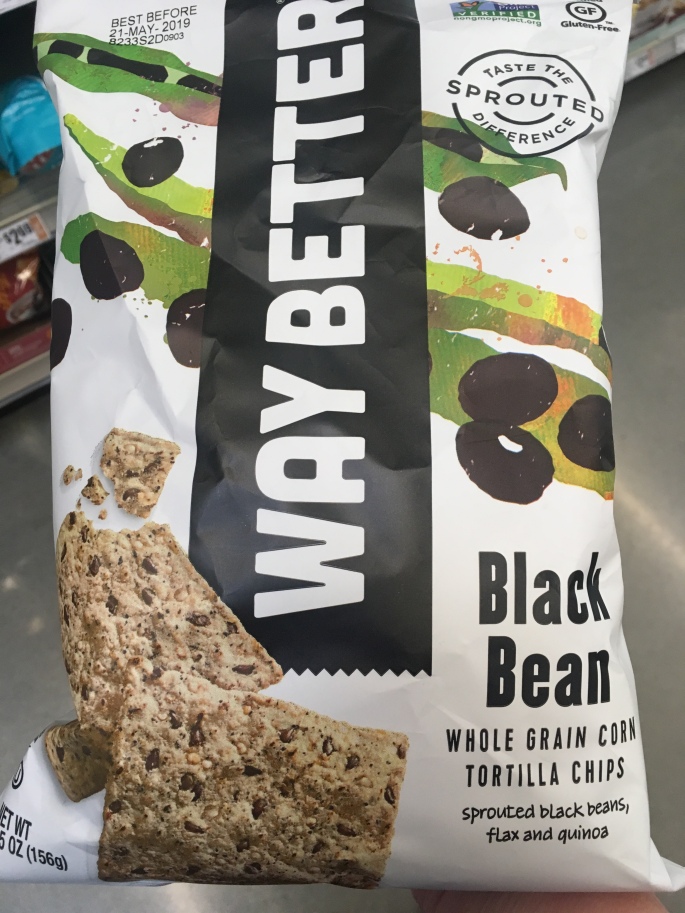 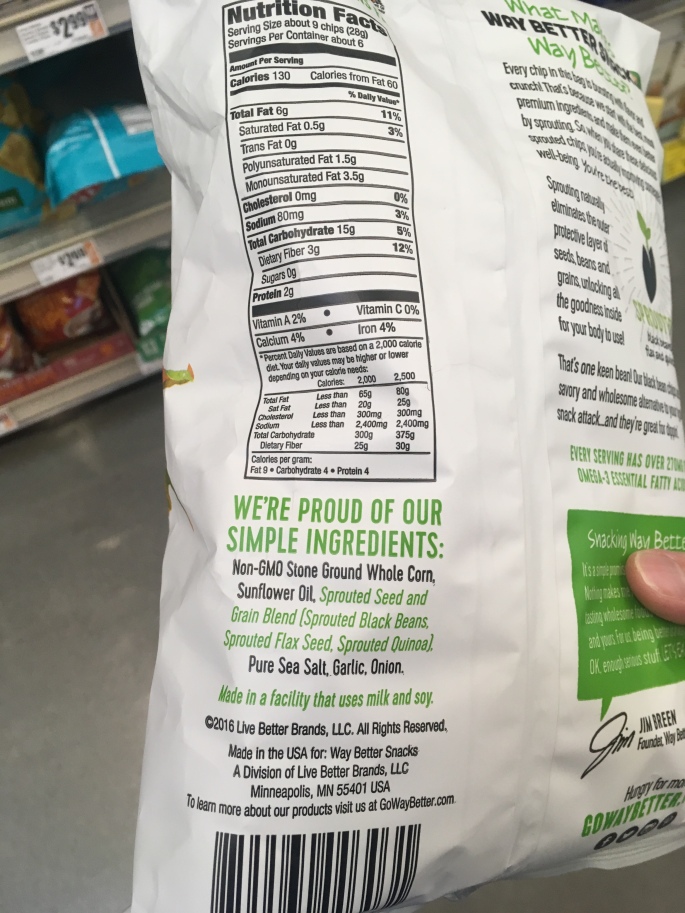 Tuna is tricky because a lot of tuna brands, even the albacore variety, contain soy.  I am not in the soy fan club; the only thing I want to see soy as an ingredient in is soy sauce.  And, even then, if I’m cooking (or more likely, my husband), we are going to use coconut aminos instead of soy sauce.  When I did Whole30, I had to search for a soy-free tuna that I would eat.  Finally, I found this one.  There may be others, as I stopped looking when I found one that didn’t specifically contain it.  This has become the only tuna that I’ll eat.

30 down, 70 to go… This is getting harder!  Well, at least the second half of each one where I choose products with ingredient lists!

This site uses Akismet to reduce spam. Learn how your comment data is processed.

This is a text widget, which allows you to add text or HTML to your sidebar. You can use them to display text, links, images, HTML, or a combination of these. Edit them in the Widget section of the Customizer.